I love Native American literature.  It’s the reason I decided to study Native American culture in college.  I find it honest, raw, and emotionally and spiritually powerful.  I love the connection they have with nature, with their families, with their history, with their stories.  Usually I’m physically engulfed in Native lit; however, I’m sad to say that this wasn’t the case with book number four, The Painted Drum. 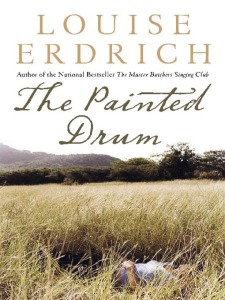 Louise Erdrich’s 11th novel begins in present day New Hampshire, where a mother and daughter team work as estate appraisers searching for Native artifacts.  When their neighbor suddenly dies, Faye Travers (the daughter) is hired to catalog the Native artifacts he has lying around his house.  Amidst the clothes, dolls, and boxes, Faye finds a mysterious drum.  Faye, who has been emotionally removed from the Native way of life, feels an immediate connection to this drum and believes she hears it beating.  In a moment of shear panic, she steals the drum and watches over it, eventually traveling to an old Ojibwe reservation to find the original owner.

At this reservation, Faye meets an old storyteller by the name of Bernard Shaawano.  In a beautiful lyric, Bernard tells Faye about the history of the drum…how it came to be, why it exists, and what had to happen for the drum to be created.  His story is one of passion, betrayal, unthinkable sacrifices, and survival.

The third and final string in this braid opens with a little girl named Shawnee desperately trying to take care of her younger siblings in the dead of winter.  Their mother is absent, having gone to town to try to find help for her children by bartering sex for money in order to buy food.  Back home, Shawnee has no choice but to haul her brother and sister through an icy night when she hears a noise in the distance…dah dah dah!!

These three stories intertwine the lives of Native women from the past and present to help tell the story of this mysterious painted drum.  While I was rooting for this book the whole time, having loved the plot, I found it to be overwritten and near impossible to read at times.  My mind wandered with the narrative and I found it difficult to focus my attention on this book.

On the other hand, I did find parts of this novel intellectually moving.  For example, wolves play a huge part in this book, both as characters and as tools of symbolism, and Erdrich’s description of them is nothing short of honorable.  She’s obviously aware that wolves are highly respected in Native culture and she’s careful not to disregard them, however savage they may seem.

The drum itself is also extremely symbolic both in this book and in the Native culture.  I found it poetic that these stories all revolved around the drum, all gave the drum a beat, just as those who are chosen to play the drum at pow wows and ceremonies are circled around the instrument, bringing it to life.

When all is said and done, I really wanted to like this book.  I loved the idea of it and was maybe expecting something more than what was given.  Though the messages in the book are heartwarming and hopeful, I found that they were overshadowed by the words, the descriptions, the fluff—if you will—that comes with making a visual novel.

SUGGESTION:  Eh, I’m torn.  I really loved the idea of this book but I had a hard time getting into it.  If you don’t mind a slow start, give it a shot.  If anything, read it for the second segment to learn about the creation of the drum.  It’s obviously written to a Native audience, so if you’re unfamiliar with their culture/customs, I’d say SHELF IT.

NEXT WEEK:  Get ready to go down the rabbit hole, but not with Alice…and we’re definitely not going to Wonderland…