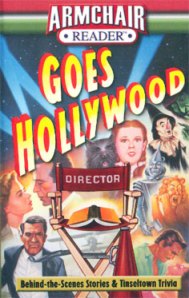 The Stars are out tonight! 🙂

I’m a sucker for non-fiction—especially books about people I respect and admire, movies and TV shows I love, and the history behind creating some of the brightest stars on the silver screen.  So when I drew the title Armchair Reader:  Goes Hollywood out of my jar of book titles, I got a little too excited.  I jumped into the book right away and finished it in a couple days.  If you are a fan of current or classic cinema, you’ll want to check this out.

Armchair Reader:  Goes Hollywood is similar to the Uncle John series, where the articles can be read at random and the book does not have to be read cover to cover.  Search around for information about your favorite movies and stars and read articles that may convince you to add some movies to your Netflix queue (who would want to pass up on a movie called Frankenhooker?  I mean, come on!)

Armchair Reader:  Goes Hollywood is chock full of Hollywood secrets, stories, scandals, set stories, and even advice on how to get your puppy into show business.  Here’s a little peek at what you’ll find in AR:  Goes Hollywood:

*Hollywood was originally built as a preservationist society where modern excesses would not be tolerated.

*Marilyn Monroe studied literature at UCLA while under contract with FOX.

*The Wizard of Oz, one of the most viewed films of all time, only cost 2.8 million dollars to make.

*Blow up dolls were used to fill the stands in some scenes in Seabiscuit.

*The cast of Casablanca had no idea how the movie would end until they were shooting it, so what you see on screen is the actor’s true reaction to the script.

*Clint Eastwood’s first movement as Mayor of Carmel, California was to legalize ice cream parlors.  They were previously banned because the ice cream was making the sidewalks sticky.

*Steven Spielberg applied to the university of southern California’s film school and was rejected three times.

*You know the famous HOLLYWOOD sign?  Of course you do.  Did you know, though, that various Hollywood stars have “adopted” the letters to keep the sign from being knocked down?  Proud parents include Hugh Hefner, Gene Audry, and Alice Cooper.

*Jaws was the first ever summer blockbuster, rolling in 129 million dollars; however, the production of the movie was about as disastrous as a shark out of water…and thank goodness it was, because if everything went according to plan, the movie we know would not exist.

AR:  Goes Hollywood is a great gift for any lover of current and classic cinema.  Keep it handy as you work your way through your movie collection and experience your films on a whole new level.

NEXT WEEK: ATTACK OF THE TALKING KUGEL!  No, it’s not an upcoming Yiddish monster movie…as amazing as that would be–

All of my Jewish readers, take note…you’re going to want to be here next week.