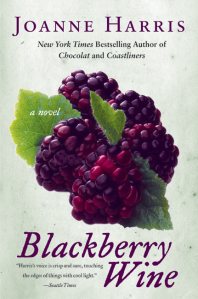 Sometimes a book is so perfectly intoxicating that you can literally engage all your senses into the story.  You can taste the foods, smell the odors, and even hear your own feet walk upon the cobblestone path that leads through the main part of town.  This utter indulgence in a book has only happened to me a few times; ironically, three of those instances were thanks to author, Joanne Harris.

In 1999, Harris published Chocolat, one of the most satisfying books I’ve read in a long time.  The sequel, The Girl with No Shadow, was equally, if not more, invigorating than the story that preceded it…and sitting in between these two delicious novels is a touching and heroic tale of a renegade winemaker by the name of Jay Mackintosh.  While Blackberry Wine is not really part of the Chocolat timeline, it does include some of the characters and helps fill the gap between the long hiatus between Vianne’s departure from the dreamy French town of Lansquenet and her eventual return.

Blackberry Wine is the sweet story of a man with a dream, a passion, a mission.  Jay Mackintosh, a one-hit wonder of an author, spent the majority of his childhood growing up with his neighbor, Joe Cox.  Joe was a winemaker, combining exotic fruits and spices to create some of the most unique wine Jay has ever tasted.  Jay was so inspired by Joe’s life and stories that he decided to write a novel about him, Jackapple Joe.  The novel was a huge success and Jay spent many years basking in the glory; however, as the craze for Jackapple Joe dies down, his publisher starts demanding another story.  Uninspired and unmotivated, Jay throws all caution to the wind and impulsively buys a little cottage in France, hoping inspiration is waiting for him there; however, Jay soon discovers that this little house holds more than just dust and discarded furniture…it holds stories, spirits, and secrets.

Blackberry Wine is not my favorite of Joanne Harris’s novels.  It took a while for me to get into it, but once the book released its flavor, I couldn’t get enough.  Uncork your favorite bottle of wine, cozy up with a comfy blanket and get ready to go on one romantic and eye-opening adventure with Jay Mackintosh.

NEXT WEEK:  Every kid has a dream.  When I was three, I wanted nothing more than to be a veterinarian.  Next week, we’ll follow the many adventures of one of the most famous veterinarians on his many quests to change the lives of hundreds of people…one pet at a time.