Fettuccine with Sausage and Kale

As you all may have guessed, I love kale.  It’s one of the best foods you can eat and it really goes well with soups and pastas.

I usually mix sausage and kale in a delicious soup, but I was feeling adventurous the other day and decided to try a pasta combination.  This is a simple recipe for a weeknight meal and it can easily feed 4-6 hungry mouths.  You could also use chicken and spinach instead of sausage and kale, if you prefer.

One reason I like cooking with kale is that it’s very forgiving.  It takes quite a while for kale to really cook and wilt down…so it’s great for those who tend to be a little flaky in the kitchen (*raises hand*).  I also love that kale maintains its crunch and shape after being cooked, unlike spinach which wilts and becomes a soggy mess if you’re not careful.

Veggie lovers can also omit the sausage from this dish without any problem.  This recipe originally calls for 1 lb. of sausage, however I only added 1 sausage link (about the size of a bratwurst).  That way there was just a taste of meat without all the fat and sodium.

This is a great meal for a Wednesday or Thursday night.  As a matter of fact, I think I made this one rainy Thursday evening and enjoyed it with a marathon of Law and Order: SVU.  Strange combination, I know…but I can’t help myself! 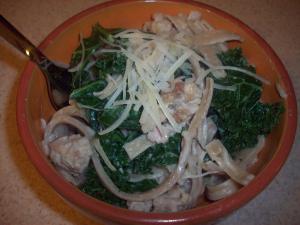