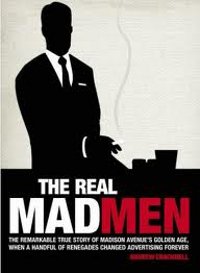 Have you ever wondered if life at Sterling Cooper (or the more recent Sterling Cooper Draper Price) is the real deal, or just an ad for what we imagine the advertising industry to be? Have you ever wondered what real ad executives think about AMC’s Mad Men? Did ad men really just sit around drinking and smoking, going in and out of the office as they please, and wining and dining women until all hours of the night?

Real Mad Men reveals the true players of Madison Ave. in the era of the advertising boom. Filled with 150 full-color illustrations, interviews with real “Mad Men”, and looks into some of the most successful campaigns in American history–including the iconic VW bug campaign, Alka Seltzer, Volvo, and Braniff Airways–Real Mad Men gives readers a rare look into the in’s and out’s of the ad agencies that populated New York’s famed Madison Avenue.

This book also contains interviews with ad executives who were the Don Drapers of their day…and asks them what they think of AMC’s portrayal of their work and personal lives. It shows readers how campaigns were headed, executed, created, and obliterated, and gives fans of Mad Men a look into what the industry was really like in this era of advertisements, slogans, jingles, and logos.