It was 41 years ago today that thrill-seeking patrons flocked to their nearest theaters to witness one of the most terrifying and shocking movies of the time: Jaws.

Thought to be the first summer blockbuster movie ever, Jaws became an overnight sensation. It made $7,061,513 on its opening weekend, and that was in 1975! More than 67 million Americans flocked to see this movie on the big screen, and it forever changed how production studios treated their summer releases.

Jaws spawned several sequels, a dedicated and loyal cult following, and the shark used in the film, named Bruce by director Steven Spielberg, even got honored in another movie several years later:

No summer would be complete without at least one viewing of Jaws, and to celebrate its anniversary, here is a fun treat you can serve at your movie night! 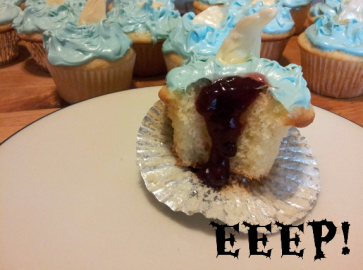 *FOLLOW UP NOTE: So…here’s the thing. After about 10 minutes of making these cupcakes, my shark fins started to melt and droop. Granted my kitchen was very warm, but if you’re making these for a party where they’re going to sit out for more than a second, I suggest forgoing the white chocolate fins and using fondant or even white Air Head candies to create the fins. Wilton’s Candy Melts candy might also hold up without melting at room temperature.