Disney Princes…Where Are They Now?

A few weeks ago, we took a look to see what happened to the voices behind our favorite Disney Princesses. Now what about their counterparts?

Though many of the official Disney Princes didn’t have a lot of screen time, they were still essential to every Disney story. Voiced my strong men of all kinds, these princes set the bar for every little girl dreaming of her Prince Charming.

Whether they rode in on a white stallion or a flying carpet, these men made little girls dream of fairy tale endings, sang some of our favorite Disney songs, and brought us into royal worlds that were once only figments of our imaginations. 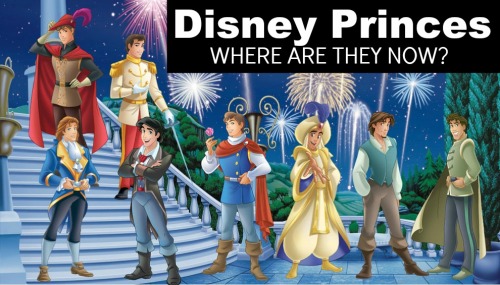 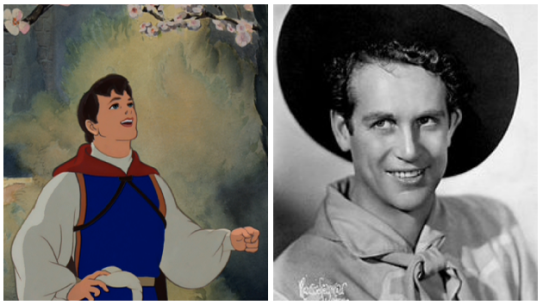 A native of Kansas City, Missouri, Harry Stockwell made his film debut in the 1935 film, Strike Up the Band. However, his claim to fame came two years later when he was cast as “The Prince” in Walt Disney’s Snow White and the Seven Dwarfs. Though he was not held to such insane terms as his vocal counterpart (see Disney Princesses: Where Are They Now), this small role remained his best-known part throughout his career. A noted Broadway performer, Harry also performed as “Curley” in Broadway’s Oklahoma!, a role he maintained until 1948. He is also father to two fellow actors, Dean Stockwell (Anchor’s Aweigh, The Secret Garden, Long Day’s Journey Into Night, Blue Velvet, Married to the Mob) and Guy Stockwell (Adventures in Paradise, Knight Rider, Magnum P.I., Murder She Wrote, Columbo, Quantum Leap, The War Lord, It’s Alive). He died in 1982 at the age of 82. 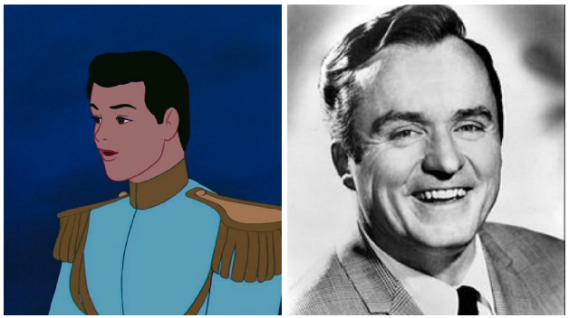 Mike Douglas (born Michael Delaney Dowd, Jr.) was a “big band” era singer, entertainer, and television host. Born in Chicago, IL, Mike started his career as a choirboy and radio singer. In 1950, he offered his singing voice for the role of Prince Charming in Disney’s Cinderella, then began the upward battle of trying to keep big band music relevant amidst a changing musical culture. Mike eventually went back to his TV hosting skills and started The Mike Douglas Show in June of 1965. The show helped introduce entertainers such as Barbara Streisand and Aretha Franklin and showcased popular guests like Truman Capote, Richard Nixon, The Rolling Stones, and Moe Howard of The Three Stooges. The Mike Douglas Show remained on air until 1981 when it was cancelled due to low ratings. Mike passed away suddenly in 1990 on his 81st birthday. 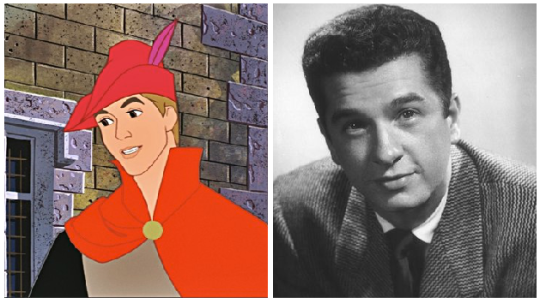 A cherished singer from the age of 5, Bill Shirley grew up in a musical household and would often sing along with his mother, Inez Shirley, who was a well-known professional pianist. He sang in church and was an active member of the Children’s Civic Theater, the Ogden Chorale, and the Irvington Playhouse. When he was 19, he moved to Hollywood with his mom and began his movie career with small roles in hard-to-find pictures. He signed on with Republic Studios in 1941 and appeared in rare B-list films, including Rookies on Parade, Sailors on Leave, and Doctors Don’t Tell. Besides a few radio and TV spots, Bill had trouble furthering his Hollywood career. It wasn’t until he was approached by The Walt Disney Company to voice the character of Prince Phillip that his career began to take shape. After his work on Sleeping Beauty, he got another big break as a ghost singer in the film, My Fair Lady, acting as Freddy Eynsford-Hill’s singing voice (“On the Street Where You Live” was sung by Bill Shirley). Unfortunately, Bill often received little to no credit for all the work he did in front of and behind the camera, so the great scope of his accomplishments is unknown. After years of directing plays and performing on camera and on stage, Bill retired from acting in 1963. He passed away from lung cancer in 1989, at the age of 68. 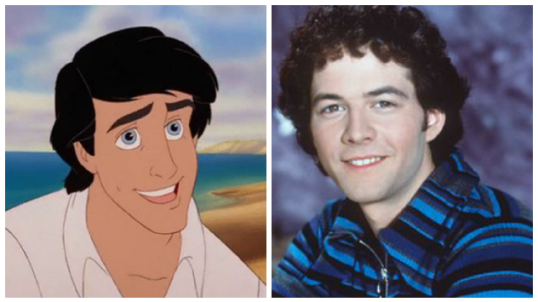 At the tender age of 16, C.D. Barnes was cast as the voice of Prince Eric in The Little Mermaid. He reprised the role 17 years later in the 2006 Kingdom Hearts II game.   He also voiced Prince Charming in two Cinderella sequels, Cinderella II: Dreams Come True and Cinderella III: A Twist in Time. After The Little Mermaid, C.D. got what is thought to be his big break in the business. From 1994 to 1998, he voiced the lead role in the Spider-Man cartoon series, which remains the longest-running TV show based on the superhero. He’s also done some work in front of the camera, appearing as Greg in the Brady Bunch parody movies and has appeared in several TV shows, including Malcolm & Eddie, Wings, Blossom, The Golden Girls, Touched By an Angel, 7th Heaven, and Day by Day. Most recently, C.D. Barnes reprised his role as Spider-Man in the Marvel Heroes 2013 video game.

The Beast/The Prince
Beauty and the Beast (1991)
Voiced By: Robby Benson 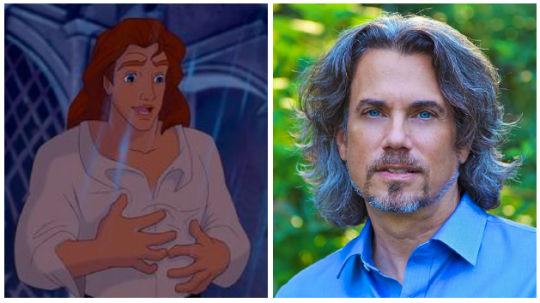 Robby Benson (Robin David Segal) is perhaps best known for his role as The Beast in Disney’s famed classic, Beauty and the Beast. Before landing the gig, he acted in several coming-of-age films and smaller Hollywood movies, including The Death of Richie and Ice Castles. After voicing The Beast, Robby took to the written word and landed a spot on the LA Times Bestseller List with his 2007 novel, Who Stole the Funny?: A Novel of Hollywood. He released his medical memoir, I’m Not Dead…Yet! in June 2012, a candid journey through his Hollywood life and his courageous battle with a congenital valve defect and how he survived four (FOUR!) open heart surgeries. He’s a two-time Golden Globe nominated actor and has directed more than 100 TV episodes and pilots. He’s taught film at NYU’s Tisch School of the Arts and was nominated for the New York University’s Distinguished Teaching Award in 2006 and the David Payne-Carter Award for Teaching Excellence in 2010. As of 2016, Robby is currently Professor of Practice in Telecommunications at Indiana University in Bloomington, IN. 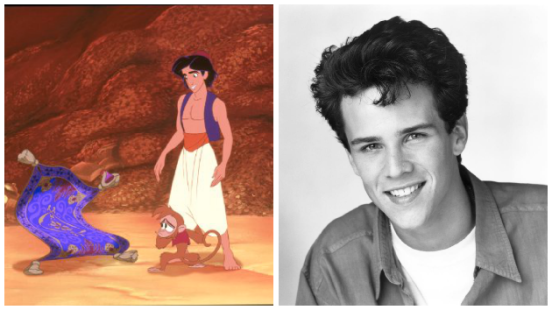 Scott’s first professional acting work was in a national commercial for Ideal Toys. He went on to act in Police Academy 5 and made a guest appearance on ABC’s Live Goes On. He became a friendly face on TV, appearing in The Family Man and Full House as well. It was during his run in Full House that Scott was cast as the voice of Aladdin. He reprised his role several times after, appearing as the street urchin in the CBS Aladdin series and direct-to-video sequels. He also appeared in The Return of Jafar, Aladdin and the King of Thieves, and voiced the character in several Kingdom Hearts and Disney video games. Scott graduated magna cum laude from Harvard University in 1998 with a degree in English and American Literature. He has written and produced for several TV shows and has returned to the Tanner dwelling as Steve Hale in Fuller House. 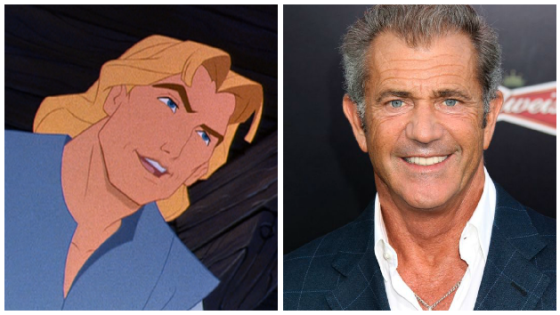 A familiar face to most movie-goers, Mel Gibson is a stable in the Hollywood role call. With great success previous to his role in Pocahontas, Mel went on to create three movies in 2000 that each grossed more than $100: The Patriot, Chicken Run, and What Women Want. In 2002, he went on to appear in M. Night Shyamalan’s Signs, which became the highest-grossing film of Mel’s acting career. After Signs, Mel took a break from acting until 2010 with his return in the film, Edge of Darkness. He has starred in, produced, and directed several films, including The Passion of the Christ, the highest grossing rated R film of all time. His most recent credit is Blood Father, a Jean-Francois Richet film due to hit theaters in August 2016. 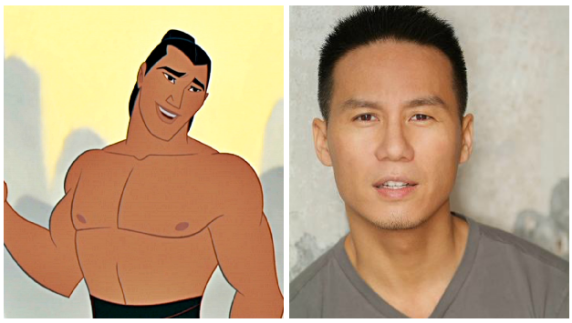 A celebrated Tony Award-winning actor and performer, B.D. Wong is no stranger to the big and small screens. His more notable roles include parts on Law and Order: SVU, Oz, and a reoccurring role as Dr. Henry Wu in the Jurassic Park series. He has appeared in several Broadway shows, including M. Butterfly, a role that earned him a Tony Award, Drama Desk Award, Outer Critics Circle Award, Clarence Derwent Award, and Theatre World Award all for the same role (he’s the only actor to achieve this monumental feat). After his work on Mulan, B.D. Wong went on to voice Li Shang again in Mulan’s direct-to-video sequel and the video game, Kingdom Hearts II. A standout in the LGBT community, he also donates his time and resources to a number of charities, including the Ali Forney Center, Materials for the Arts, and Rosie’s Theater Kids. Currently B.D. Wong appears in the TV series Gotham.

Prince Naveen
The Princess and the Frog (2009)
Voiced By: Bruno Campos 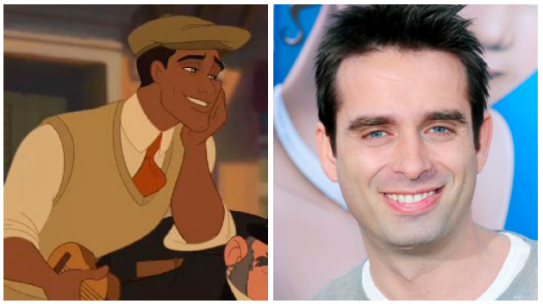 A native of Brazil, Bruno Campos is perhaps best known for his role as Dr. Quentin Costa in the award-winning TV show, Nip/Tuck. Raised in the US, Bruno attended Michigan’s Interlochen Arts Academy at the age of 14. He went on to study drama at Northwestern University and earned a law degree from the University of Michigan Law School In 1995, he starred in the Brazilian film, O Quatrilho, which was nominated for Best Foreign Language Film at the Academy Awards. After his work on The Princess and the Frog, Bruno left the acting business and is now a litigation associate at the law firm of Morgan, Lewis & Bockius. He’s set to reprise his role as Prince Naveen in the 2016 Kingdom Hearts III video game. 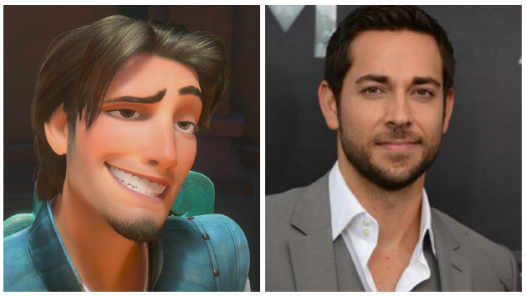 A native of the stage, Zachary got his start acting at the age of 5, appearing in regional productions of Grease, The Outsiders, Oklahoma!, Oliver!, and The Wizard of Oz. His first starring role came in 2007 in the TV series, Chuck. After his work on Tangled, Zachary went on to continue work in TV and on the stage. He was signed on in 2015 to reprise his role as Flynn Rider in the upcoming TV series, Tangled: Before Ever After, set to air on the Disney Channel in 2017.

Tagged as disney, just bee-cause, pop culture, where are they now