Whenever One Flew Over the Cuckoo’s Nest is on TV, I have to stop whatever I’m doing and watch it. Personally, I think it’s Jack Nicholson’s best performance and maybe one of the best films I’ve ever seen.

For as much as I love the movie, I didn’t know it was a book first until I stumbled upon the audiobook at the library. I decided to check it out…

Though I think I like the movie a tad better, the novel One Flew Over the Cuckoo’s Nest was an intoxicating read, and a very different take on R.P. McMurphy and Chief Bromden (who ironically ends up narrating the novel).

I just finished the book a few days ago and immediately watched the movie yet again…inspiring today’s post…33 Fun Facts about One Flew Over the Cuckoo’s Nest.

A film with quite an interesting backstory, One Flew Over the Cuckoo’s Nest opened in 1975 to critical acclaim. It had a killer opening weekend and swept the Oscar ceremony, with awards for Best Picture, Best Actor and several more. It was the film debut of Brad Dourif (who scored a Best Supporting Actor nomination for this role as Billy Bibbit) and popular favorite, Christopher Lloyd.

Set in a real-life psychiatric hospital, One Flew Over the Cuckoo’s Nest also featured a few actual patients and provided a home for the cast during filming. It’s on the favorite movie list of several A-listers, including Ron Howard and Barack Obama, and has been added to the Best 100 Movies of All Time list, as well as the National Film Registry.

If you haven’t seen it, I highly suggest you check it out…and if you have seen it, read these fun facts and watch it again!

One Flew Over the Cuckoo’s Nest is the favorite movie of director Ron Howard and President Barack Obama.

Ken Kesey’s novel of the same name was based on his experiences while working at the Veterans Administration Hospital in Palo Alto, CA.

The title of the film (and novel) gets its name from an American children’s folk rhyme. It’s mentioned in full in the novel but never referenced in the film.

During most of the film’s shooting, William Redfield (Harding) was ill. He died several months after the film was completed.

Many extras in the film were real mental patients.

One large change between the book and the film is that the book is narrated by Chief Bromden…a decision that was left out of the movie. Because of that, author Ken Kesey refused to see the film adaptation of his novel.

One Flew Over the Cuckoo’s Nest was the first film to win all “Big Five” Academy Awards in 41 years. Not since 1934 (It Happened One Night) did one picture win Best Picture, Best Director, Best Actor, Best Actress, and Best Screenplay. This honor would not be matched again until Silence of the Lambs won the Big Five in 1992. No film has won the Big Five since.

Other actors considered for the role of Randle P. McMurphy included Kirk Douglas (who was McMurphy in the stage production, shown below), Gene Hackman, Marlon Brando, and Burt Reynolds.  It was awarded to Jack Nicholson because he was the biggest Hollywood name at the time. 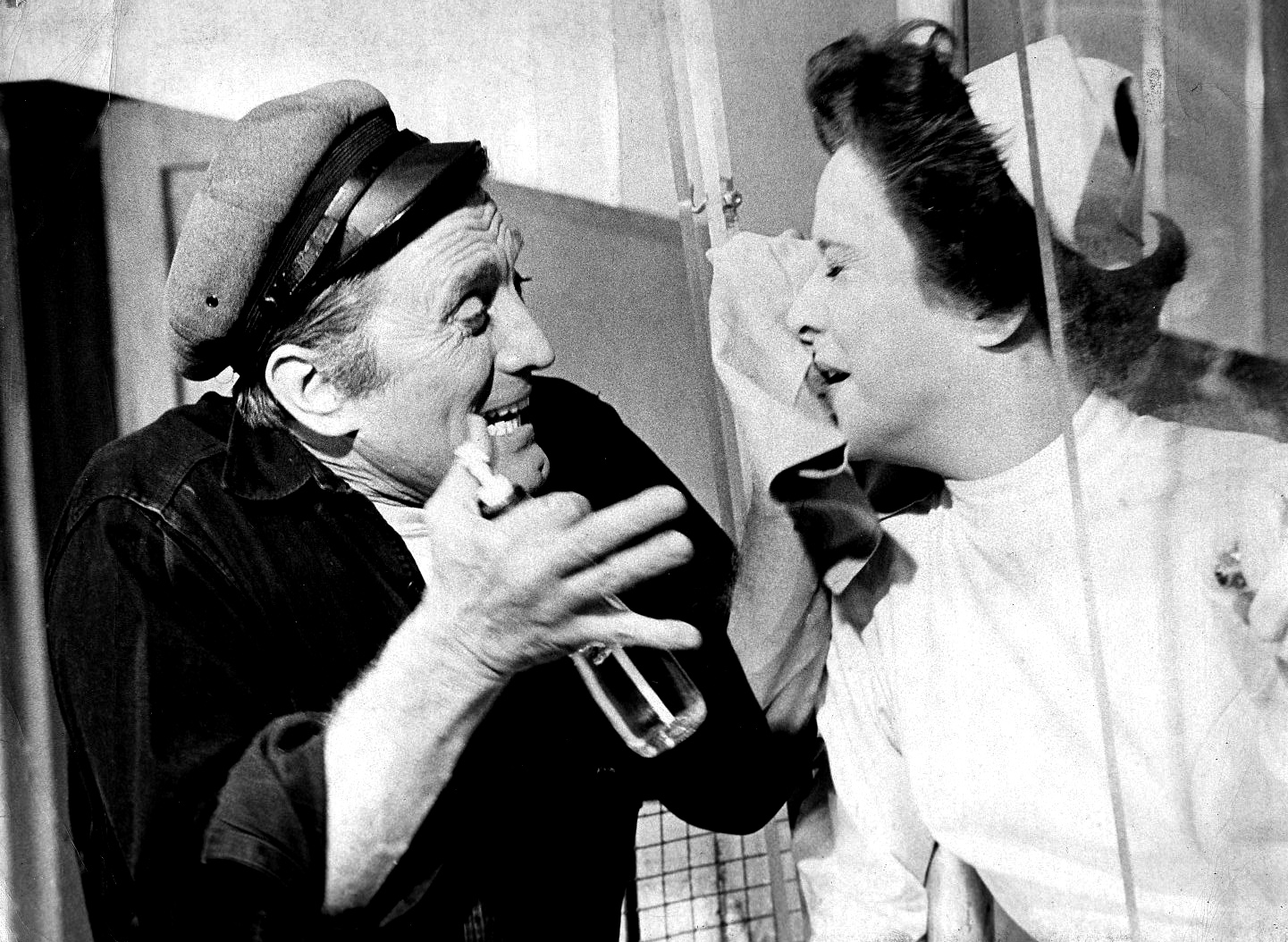 As for Nurse Ratched, several actresses were considered as well, including Anne Bancroft, Colleen Dewhurst, Geraldine Page, and Angela Lansbury.

The doctor who assessed R.P. McMurphy at the beginning of the film (Dr. John Spivey) was actually a facility superintendent at Oregon State Hospital, where the movie was filmed.

Mel Lambert, another non-actor, was also asked to play the harbormaster who protested McMurphy and his crew taking the boat out on a fishing trip. What’s more, Lambert had a strong relationship with the Native American community in Oregon and introduced the production team to Will Sampson, who would be cast as the major character, Chief Bromden.

All of the actors who played patients actually lived on the Oregon State Hospital psychiatric ward throughout production. They personalized their sleeping quarters and spent their days on campus getting a sense of what it was like to be hospitalized.

To add to the effect of realism, the director led his performers in unscripted group therapy sessions in which he directed the actors to develop their characters’ psychological maladies organically. He would capture footage of the actors, both in and out of character, without mentioning that the cameras were rolling.

Most of Jack Nicholson’s scene with Dr. Brooks (Spivey) upon arriving at the hospital was improvised – including the slamming of the stapler, asking about the fishing photo, and discussing his rape conviction. Brooks’s reactions to Nicholson in that scene were 100% authentic.

Strained by a demanding shooting schedule that kept him away from his wife, Rhea Perlman, Danny DeVito created an imaginary friend with whom he would have nightly chats. Concerned that his own sanity might be slipping away, he sought the advice of Dr. Brooks (Dr. Spivey in the film), who assured him there was no reason to worry as long as DeVito could still identify the character as fictional.

The cast and crew were also concerned about the behavior of Sydney Lassick (Cheswick). He exhibited increasingly unpredictable and emotionally erratic behavior during his time in character, a pattern that culminated in a tearful outburst during his off-screen observation of the final scene between McMurphy and The Chief. Lassick became so overwhelmed during the scene that he had to be removed from set.

The play opened on Broadway in NYC in November 1963 and closed after 82 performances. The cast included Kirk Douglas as R.P. McMurphy, William Daniels as Dale Harding and Gene Wilder as Billy Bibbit.

The final scene of the film was shot in one take.

Dr. Brooks and Mel Lambert weren’t the only newbies to the big screen. One Flew Over the Cuckoo’s Nest was also the film debut for Brad Dourif (who received a Best Supporting Actor nomination for his role as Billy Bibbit), Christopher Lloyd, and Will Sampson.

During the ECT scene, McMurphy says, “A little dab will do ya” as the nurse is putting conductor gel on the side of his head. This phrase, not in the original script, is a reference to the advertising gingle of Brylcreem hair cream, which was a popular hair care product for men in the 60s and 70s.

Danny DeVito reprised his performance for a 1971 off-Broadway revival.

Louise Fletcher was so disturbed by her own performance as Nurse Ratched that she couldn’t watch the film for years.

Jack Nicholson seems to be a master negotiator, as he took a percentage of the profits of the film in lieu of a small salary. The move paid off when the picture went on to gross well over $120 million. He pulled a similar arrangement with Tim Burton’s Batman.

When filming the fishing scene, all of the cast except Jack Nicholson got seasick. What made it worse for them was it took a whole week to film it! Danny DeVito apparently still gets queasy thinking about it.

The fishing scene was almost cut from the film. It was the final scene filmed and the only piece shot out of chronological order.

A little Easter Egg for the fishing scene: Angelica Huston makes a small cameo as an onlooker who was watching the boat as McMurphy steers the boat back to shore (Huston and Nicholson were dating at the time).

The fishing trip sequence was filmed at Depoe Bay, Oregon – the smallest harbor in the world.

Most of the cast was chosen by putting them in group therapy auditions.

Filming was so intense and strenuous that the party scene was actually such a welcome “breathe of fresh air” for the cast (this is also my favorite scene in the entire film!  BILLY YOU LITTLE HEARTBREAKER).

Jack Nicholson, Danny DeVito, and Vincent Schiavelli – all patients in the hospital – all played villains in Tim Burton’s Batman films.

In 1993, the movie was deemed “culturally, historically and aesthetically significant” by the United States Library of Congress and selected for preservation in the National Film Registry.