35 Fun Facts About Gone with the Wind

On January 17, 1940, the town of Atlanta, Georgia became a hub of activity. Some of the wealthiest families of the day, including the Vanderbilts, the Rockerfellers, and the Astors, flocked to the Loew’s Grand theater to be a part of what would become a historic evening.

On that cool day in January, the streets of Atlanta became a buzz with locals and tourists, all hoping to catch a glimpse of the stars soon to be walking into the theater. Afer days of parades and parties, the moment had finally arrived…the premier of the grand and anticipated classic, Gone with the Wind.

Thought to be one of the best movies of all time, Gone with the Wind opened to massive success. When the novel was released in June of 1936, it sold millions of copies within months of hitting the shelves. When word spread that it would be turned into a movie, it became the talk of the country…and celebrities of all kinds flocked to the studio to try to become a part of this soon-to-be classic.

Now, near 77 years later, the movie still continues to draw in large crowds whenever it’s brought back to the theaters. It sits comfortably on several top movie lists and shot front-runners Vivien Leigh and Clark Gable into Hollywood stardom. It won several Oscars, including the first Oscar to be awarded to a black actor, and instantly became a record-setter that wouldn’t be touched for nearly 20 years.

Like most classic epics, Gone with the Wind is a commitment, clocking in at about 4 hours long…but it was a monumental achievement in its time. It tired out 3 directors, 16 writers, and every actor in the Screen Actor’s Guild at the time.

In my life, I’ve made it through Gone with the Wind twice, once on my own time and once in the theaters. It’s an amazing film and worth seeing just for the costumes alone! With amazing acting, beautiful cinematography, and elegant prose, Gone with the Wind is sure to stay a classic for years to come!

To help honor this film and shed some light onto what it cost, both financially and emotionally, to create this epic piece of cinematic history, here are 35 Fun Facts about Gone with the Wind…all of which will certainly make you give a damn the next time you watch it!

35 Fun Facts About Gone with the Wind

The original director of Gone with the Wind was George Cukor, who had spent more than two years in planning and developing the film.  However, there was friction on the set when it became public knowledge that Cukor was gay.  Clark Gable (Rhett Butler) voiced concern in working with Cukor for a variety of reasons…one being that Gable himself had been a homosexual hustler in his youth and didn’t want Cukor to expose him…the other being that Cukor had a reputation for making “woman’s films” and therefore Gable would lose the spotlight.  Whatever the reason, Cukor wasn’t the only one to walk.  The film actually had three directors throughout the course of its production (Cukor filmed 18 days, Victor Fleming filmed 93, and Sam Wood filmed 24).

Leslie Howard (Ashley Wilkes) absolutely hated his role in the film.  He felt his slender 40-year-old frame wasn’t believable as a handsome 21 year-old, as Ashley was supposed to be.  He felt he was “not nearly beautiful or young enough to play Ashley”.

Producer David Selznick wanted no less than 2,500 extras to lie in the dirt, portraying the dead and wounded Confederate soldiers toward the end of the war.  However, the Screen Actors Guild only had 1,500 to offer at the time.  Therefore Selznick ordered 1,000 dummies to round out the scene.

It took 16 different writers to make the screenplay a viable length.

Selznick used all 7 Technicolor cameras in existence for the filming of Gone with the Wind.

Author Margaret Mitchell started writing Gone with the Wind out of boredom.  She was recovering from an injury when she decided to dabble in writing.  Her project would take her 10 years to complete.  You’re not alone, GoT fans!

Old West gunslinger Doc Holliday was Mitchell’s cousin…and many believe he was the inspiration for the character of Ashley Wilkes.

It is estimated that if Selznick included all the dialogue from the book in the movie, Gone with the Wind would be about 168 hours long!

Selznick bought the movie rights from Mitchell for $50,000.  At the time, it was the highest price ever paid for a first novel.

The novel Gone with the Wind had been a phenomenal best seller upon its release…and the movie was hotly anticipated.  Over 1 million people poured into Atlanta to witness the premier of the movie.  The Governor of Georgia declared the day a state holiday and the mayor of Atlanta organized three days of parades and parties.

Attendees of the premier included the Vanderbilts, the Rockerfellers, the Astors, J.P. Morgan, and all the Govenors of what used to be the Confederacy.

In fact, there were more people at the premier of Gone with the Wind than there were in Atlanta at the height of the Civil War.

The title Gone with the Wind comes from the poem “Cynara!” by Ernest Dowson.

Half a million feet of film were shot for this near 4-hour movie.  It was cut down to only 20,000 feet in the end.

About 1,100 horses were used in the making of this film…oh the days before CGI…

Gone with the Wind was the first film to receive more than five Academy Awards, receiving eight regular and two special Oscars.  The record stood for 20 years until Ben-Hur won 11 in 1959. Hattie McDaniel (Mammy) became the first black actor to win an Academy Award for her part in the film; however, she and her fellow black actors were banned from attending the film’s Atlanta premier. About 1,400 candidates were interviewed for the part of Scarlett, and of those, only 90 were given screen tests.  Selznick had Katharine Hepburn as his front-runner, but in the end thought she wasn’t sexy enough for the role.

Unable to make a decision, Selznick turned the search for Scarlett into a publicity stunt.  He asked the public who they thought should score the role.  Top choices included:  Joan Crawford, Bette Davis, Susan Hayward, Lana Turner, and Tallulah Bankhead.

Despite not having Scarlett cast, Selznick went on with filming.  Legend has it that during the filming of the great “Burning of Atlanta” scene, actress Vivien Leigh was just being introduced to the producer by Selznick’s brother.  She beat out about 1,400 other girls for the role of Scarlett O’Hara.

The Florida chapter of the United Daughters of the Confederacy were greatly offended that a British actress had been chosen to play such an iconic southern character; however, when they learned the role was close to going to Katharine Hepburn, they stopped their protest.  Better a Brit than a Yankee!

Despite their steamy on-screen romance, Leigh has said that kissing Gable wasn’t all it was cracked up to be.  He wore false teeth and smoked a lot and she was quoted as saying, “his dentures smelled something awful”.

The “Burning of Atlanta” scene was actually the first scene they filmed, as it would be the most expensive and they really only had one shot to make it work.  They actually made it quite successful by burning old sets on the backlot. It took 15,000 gallons of water to douse the flames after filming ended.

The character of Ashley Wilkes was one of the few countrymen to survive the war.  Ironically, the man who played him (Leslie Howard) died as a soldier in WWII.

Unlike other epic war movies, Gone with the Wind doesn’t actually show any battles…only the effects of the war.

At auction, Michael Jackson paid $1,542,500 for David Selznick’s Best Picture Oscar for Gone with the Wind.

A Brazilian woman, who claims to have seen Gone with the Wind 8,000 TIMES, bought Scarlett’s pink dress worn during the “Burning of Atlanta” scene for $95,500. 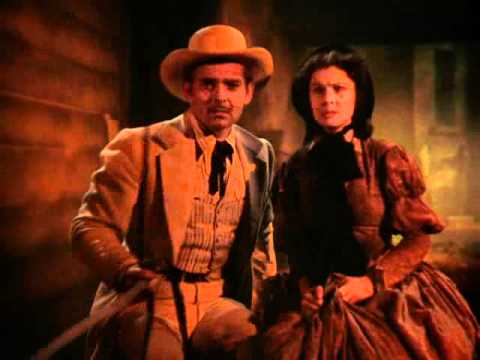 If Gone with the Wind were to be made today, it’s estimated it would come with a $40 million price tag.

Overall, Gone with the Wind cost about $4.25 million to make.  In its initial run, the film grossed $21 million in North America alone and a total of $32 million worldwide.

When adjusted for inflation, Gone with the Wind is the highest grossing film ever made, grossing about $390 million worldwide.  In today’s money, that’s about $3.3 billion, more than today’s two biggest blockbusters, Avatar ($2.8 billion) and Titanic ($2.7 billion).

It’s also believed to be the most watched film of all time, meaning more people bought tickets, regardless of price, to this film than any other.