At the tender age of 14, Elizabeth Smart was abducted at knife point from her family home in Salt Lake City, Utah.  For 9 months she remained missing, being raped, abused, and threatened daily by her captures, Brian David Mitchell and Wanda Barzee.  They hid in the western mountains, traveling through Utah, into California, and back to Utah again before Smart was eventually rescued by police in March 2003.

The story of her kidnapping and rescue efforts captured national attention.  Her face was on every news channel, in every newspaper, and you couldn’t eat or shop in public without hearing someone mention her name.

Nearly 10 years after her rescue, almost to the day, Smart released her memoir about her abduction and rescue.  Her book, titled My Story, chronicles the moments right before her abduction to the moments after the trial of her captures.  With great detail and amazing courage, Smart recounts the fear she felt upon seeing Mitchell in her room, the feeling of his knife at her back, and how scared she was during that long, dark walk up to Mitchell’s camp, where she would remain, just a mere 2 or so miles from her home,  for the majority of her capture. 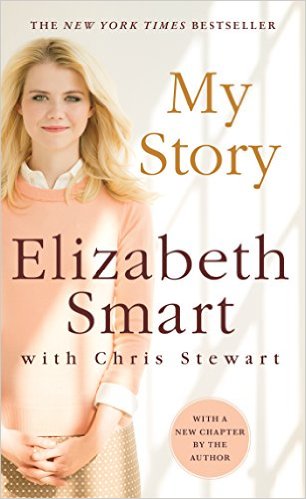 With heartbreaking tales of torture, abuse, greed, starvation, and sacrifice, Smart leads us on a journey back to her darkest days, doing her best to bring us into the moment, to feel the fear and pain she felt all those years ago.  In the 9 months she remained missing, Smart had no choice but to remain strong and fight, despite her situation, and her force, determination, and God-loving courage is so evident in this memoir that I had to keep reminding myself that this poor girl was only 14 when her life completely changed forever.

Unlike many child abduction stories, Smart’s story actually has a somewhat happy ending.  After her rescue, Smart became a strong activist and journalist, bringing the stories of other children into the public eye.  She founded the Elizabeth Smart Foundation, which aims to educate children about violent and sexual crimes and she currently works as a commentator for ABC News, mainly focusing on missing persons cases.  Now a happy wife and mother, Smart has made great and amazing strides to normalize her life after her abduction.

Told in her voice, in her way, (and read by her if you do the audiobook!), My Story is an empowering and emotional read that gives readers a glimpse into the personal life of one girl who was pushed unwillingly into the spotlight.