Have you ever taken a spin on the Ferris Wheel at Navy Pier?  Have you enjoyed a nice bowl of Shredded Wheat or taken selfies next to the Eiffel Tower or Space Needle?

You may not know it, but all those things and MORE were products of an Exhibition Fair.  First started in the UK in the 1800’s, Exhibition Fairs (or World Fairs) have attracted millions of people for generations.  They’ve been held all over the globe, from Spain to Germany…Chicago to New York.

An Exhibition Fair usually features various inventions, discoveries, and insane structures meant to give fair-goers a “view of the future”.  Past exhibits have included the Space Needle in Seattle, the Ferris Wheel in Chicago, the St. Louis Zoo in Missouri, and the Unisphere in New York.

As is the case with most fairs, food is also a hot commodity, with Belgain waffles, bananas, ice cream cones, Juicy Fruit gum, Shredded Wheat cereal, and popcorn making debuts at various Exhibition Fairs all over the world.

After finishing Devil in the White City, a book about the Chicago World’s Fair in 1893, I became FASCINATED with these attractions.  I did a little research and gathered a few fun tidbits here about the history of the World’s Fair!

The Eiffel Tower, The Museum of Science and Industry (Chicago), the Ferris Wheel, the Japanese Tea Garden (San Francisco), the Unisphere (New York), the St. Louis Zoo, and the Space Needle were all thanks to various exposition exhibits. Chicago’s 1893 Fair was dubbed “The White City”.  It was said to have inspired author L. Frank Baum to create the Emerald City in his book, The Wizard of Oz. 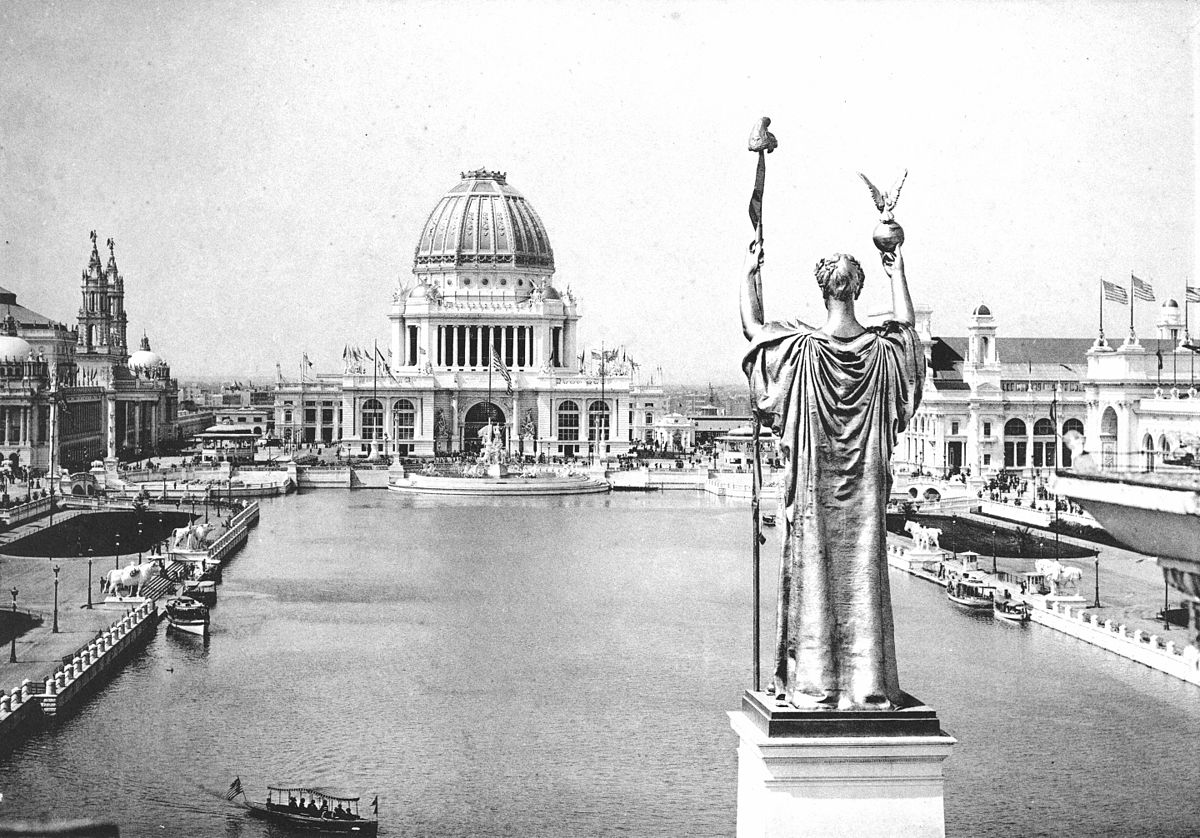 From above, the 1958 Expo in Brussels (intentionally) was shaped to look like a cow. Though it’s a trademark of Disney World now, the “It’s a Small World” ride actually premiered at the 1964 Fair in New York.

The St. Louis Fair in 1904 had a “Living Museum” exhibit, which showcased living people from around the world…definitely one of the less politically correct aspects of the Fair from our modern perspective!

The first World’s Fair was titled The Great Exhibition and took place in the UK.  It was attended by all members of British royalty, as well as Charlotte Bronte, Charles Dickens, Lewis Carroll, George Eliot, and Alfred Tennyson.

Six million people – equivalent to a third of the entire population of Britain at the time – attended The Great Exhibition.

The Centennial International Exhibition of 1876 was the first World’s Fair to be hosted in the US (Philadelphia, PA, to be exact). Visitors to the 1939 World’s Fair in New York got to hear Albert Einstein give a speech discussing cosmic rays.

The 1962 World’s Fair in Seattle was one of the only fairs to actually make a profit. World Expositions are still happening, though maybe not as publicized as they once were.  The 2017 fair is currently running in Astana, Kazakhstan (June 10 – September 10).