16 Books about Coping with Loss and Death

It’s inevitable. It’s unknown. It’s scary and dark and real and it’s the final ending for the entire human population…maybe the one thing that we all have in common.

For years books and movies have tried to make death more…comfortable. They’ve tried discussing topics like the afterlife, reincarnation, heaven and hell, and so on to help make death not seem so final. Now I’m not here to start a big debate on my views of life and death, but I think we can all agree that coping with death, whether that be the death of a loved one or the acceptance of death of self, is certainly a hard road to go down…

Ranging from loss of self to loss of hope, these 16 books about coping with loss and death have really opened my eyes to acceptance and understanding. Some made me mad enough to talk about my feelings, others made me cry so much that I had trouble even finishing the book, but they all helped me cope with my situation in some way, shape, or form.

I personally never really thought about death until my dad died. He was the first person who was close to me that I lost. When he died, I had no choice but to turn to books because that’s what comforted me…and I hope these books comfort you as well.

16 Books about Coping with Loss and Death 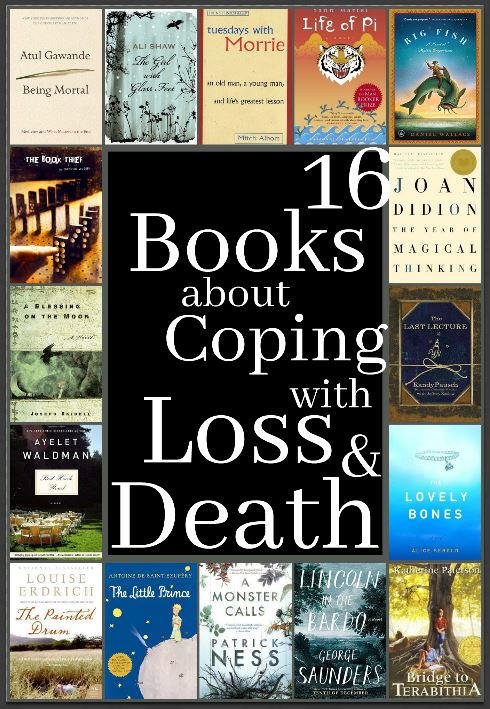 In Being Mortal, author and doctor Atul Gawande tackles maybe the hardest question about aging and death: how medicine can improve life and dying with dignity. An eye-opening look at elder care and end-of-life decisions, this book is so important for anyone and everyone to read.

The Girl with Glass Feet

On the remote and snowbound archipelago of St. Hauda’s Land, Ida Maclaird is slowly turning into glass. While searching the forest for a cure, she meets a man who ends up falling in love with her. What results is a beautiful and heartbreaking story about what we will do, no matter what the circumstance, for those we love.

What would you say to a dying mentor? Many of us don’t have that chance, but Mitch Albom did. In Tuesdays with Morrie, Mitch visits his mentor and old college professor, Morrie Schwartz, every Tuesday, just as they did back when he was in school. Their visits end up becoming one final lesson on how to really live.

Though Life of Pi isn’t a book about death in the most straight-forward way, I still find it a beautiful work of fiction that explores the issues of spirituality, survival, and acceptance of fate. The ending left me questioning a lot about my own spirituality and I loved the internal struggles that made Pi Patel such a relatable character.

In his prime, Edward Bloom was an extraordinary man. He could outrun anybody. He never missed a day of school. He saved lives and tamed giants. Animals loved him, people loved him, women loved him. He knew more jokes than any man alive. At least that’s what he told his son, William. But now Edward Bloom is dying, and William wants desperately to know the truth about his elusive father—this indefatigable teller of tall tales—before it’s too late. The story that is all of our grandfathers, Big Fish is tender, bittersweet, and a tale bigger than life itself.

Set during World War II in Germany, The Book Thief is told from the perspective of the Devil and tells the story of Liesel Meminger, a foster girl living outside of Munich. An unforgettable story about death and the afterlife, The Book Thief is maybe the best piece of Holocaust literature I’ve ever read.

The Year of Magical Thinking

Several days before Christmas 2003, author Joan Didion and her husband John Gregory Dunne saw their one and only daughter come down with a life-threatening disease that left her on life support. Days later, John Gregory suffered a massive and fatal coronary. Struck with such loss in such rapid succession, Didion attempts to make sense of those few weeks and months before, during, and after that fateful winter in her book, The Year of Magical Thinking. A beautiful testament to a family that was completely shattered, but somehow found the strength to pull through, this book will definitely touch your heart.

A Blessing on the Moon

Death is merely the beginning of Chaim’s troubles. In the opening pages of A Blessing on the Moon, Chaim is shot along with the other Jews of his small Polish village. But instead of resting peacefully in the World to Come, Chaim, for reasons unclear to him, is left to wander the earth, accompanied by his rabbi, who has taken the form of a talking crow. Chaim’s afterlife journey is filled with extraordinary encounters whose consequences are far greater than he realizes.

Based on the extraordinary final lecture by Carnegie Mellon University professor Randy Pausch, given after he discovered he had pancreatic cancer, this moving book will inspire readers to live each day with purpose and joy.

When a newly married couple dies on the way to their wedding reception, it’s up to their newly joined families to come together and now plan the couple’s funeral. A haunting book that you will power through in no time, Red Hook Road is up there with Ayelet Waldman’s finest stories about loss and grief.

A haunting tale of loss and understanding, The Lovely Bones is a beautiful story of a girl not ready to let go of her hold on life and the people she loves. Told from her perspective after her brutal rape and murder, The Lovely Bones is an interesting exploration on heaven and the afterlife.

When Faye Travers is called to appraise a collection of artifacts, she stumbles upon a haunting drum that seems to call out to her. Compelling and unforgettable, The Painted Drum explores the often fraught relationship between mothers and daughters, the strength of family, and the intricate rhythms of grief we all seem to feel at certain points of our lives.

The Little Prince is one of my favorite books, and is actually the first book I read that made me cry. A touching story about an adventurer who stumbles upon a little prince who inhabits a tiny planet, this book is an exploration into acceptance, love, and making peace with letting go.

A haunting and darkly funny novel about loss and death, A Monster Calls is about a boy, his seriously ill mother, and an unexpected visitor that helps him question everything. Phew, this one is rough guys.

Lincoln in the Bardo

A story that intertwines history, death, and spirituality, Lincoln in the Bardo is told from the perspective of several characters – both historical and invented – to answer the question we’ve all asked ourselves at one point: How do we live and love when we know that everything we love must end? A book unlike anything I’ve ever read before, Lincoln in the Bardo is a visual story that will magically come to life in your mind.

A story about pure friendship, Bridge to Terabithia is a story that will tug at your heartstrings. A story about a boy and a girl and the imaginative world they live in, this story is up there with Where the Red Fern Grows as a book that teaches kids that death, loss, and maybe most importantly, friendship, are all very, very real.