So – I’ve embarked on an EPIC challenge to watch every movie ever nominated for a Best Picture Academy Award. To do so, I’ve put all the years from 1929 to 2019 into a bucket and I’m pulling out years one by one to determine what movies to watch. 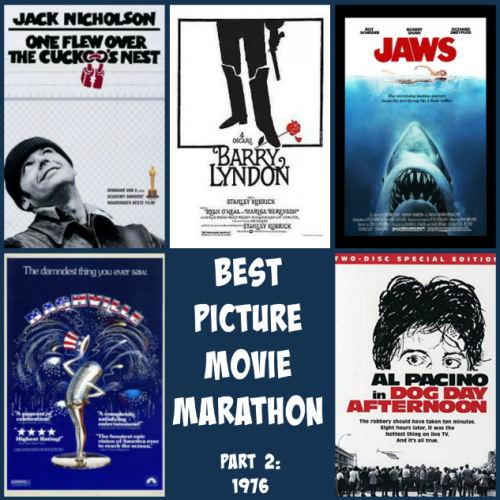 THOUGHTS
Jaws: I’ve seen this movie I don’t even know how many times and it still holds up as an awesome horror film. Such a great summer blockbuster that still gets me every time! Also, I have never wanted Saltine Crackers so much as I do when I watch this movie…

Dog Day Afternoon: In a movie about cops and robbers, the amazing thing about Dog Day Afternoon is that there really aren’t any bad guys here. Everyone from the burly NYC cops to the robber who needs money to finance his boyfriend’s sex change operation (YUP – in 1975!), is extremely likable and sympathetic. This was a stellar performance from Al Pacino (no surprise) and was surprisingly funny at times. Definitely recommend!

One Flew Over the Cuckoo’s Nest: This is easily one of my favorite movies of all time. If I stumble upon it while watching TV, I’ll stop and watch it through to the end. This movie takes you through a gauntlet of emotions, leaving you laughing in some scenes and crying in others. It’s truly no wonder this movie took home all 5 of the top Academy Awards (Best Adapted Screenplay, Best Actress, Best Actor, Best Directing, Best Picture) and watching it again for this project made me love it and appreciate it even more. Also Billy Bibbit will always and forever have my heart and no one can convince me otherwise.

Nashville: Well, that was 2 hours and 40 minutes of my life that I’ll never get back. The best part of this movie was watching Jeff Goldblum do a magic trick. In this exact amount of time, I could have flown to Nashville, squeezed into Robert’s Western World and be enjoying some cold brews and good music. I had high hopes for this one, but, like any good country tune, it just left me broken-hearted.

Barry Lyndon: Though this movie clocks in at almost 3.5 hours, it strangely doesn’t feel that long. A stunning painting in motion, Barry Lyndon is a cynical, sarcastic and ironic character movie about a poor man who marries into money, then falls into ruin. Based on a novel published in 1844, this Stanley Kubrick classic won four Oscars in 1976, including two rightly deserved awards for Best Cinematography and Best Costume Design, respectively. This movie uses a narrator to help guide the audience through the story and I gotta say, MUCH APPRECIATED. The narration not only explains the story as we move along, but also is our key to understanding a lot of the action that happens off-screen (and there’s a lot of it). This movie really has a little something for everyone: romance, revenge, fighting, happy times, sad times, family drama, basically everything a human can go through in a lifetime because, at its core, Barry Lyndon is really about people – our flaws, our fears and, perhaps most of all, our vanity.

OVERALL
Even if I wasn’t such a fan of One Flew Over the Cuckoo’s Nest, I’d have to say that was the best movie of this group and totally deserving of Best Picture. An insanely talented cast and a brilliant script made this movie shine, and it really is an emotional roller coaster from start to finish. Jaws was a fun film with great special effects for the time and really did wonders in its own right for basically defining the summer blockbuster. Dog Day Afternoon was this years hidden gem and Barry Lyndon was a visually stunning movie that showcased the human condition at its best (and its worst). Nashville was a dud in my opinion. I honestly don’t even know what the point of that movie was…other than to act as a star-studded travel commercial for visiting a town that really doesn’t need the publicity.

These movies were all about humans taking on something bigger than them, whether it was a man-eating shark or a corrupt government system. And if this lot proved anything, it’s that humanity – regardless of time and place – is determined, yet fragile.

On to the next pull!

So – I’ve embarked on an EPIC challenge to watch every movie ever nominated for a Best Picture Academy Award. To do so, I’ve put all the years from 1929 to 2019 into a bucket and I’m pulling out years one by one to determine what movies to watch.

Breaking Away: I was surprised by how much I enjoyed this movie. So sweet and heartwarming.

Norma Rae: SALLY FIELD YOU SKINNY BEAUTIFUL BAD-ASS LITTLE BISH THANK YOU FOR BRINGING THIS STORY TO LIFE. Also everyone is so sweaty in this movie!

Kramer vs. Kramer: I am so, so, so grateful that I wasn’t a child of divorce. This movie practically gave me an anxiety attack. But Justin Henry certainly earned his Oscar nomination for this movie (he was only EIGHT YEARS OLD. EIGHT!!)

All That Jazz: This self-indulgent movie describes itself perfectly in this quote from the film, “We take you everywhere, we get you nowhere.” HOW did this acid trip earn an Oscar nomination?

OVERALL
While the acting in Kramer vs. Kramer was certainly the best of the lot, I didn’t really think the story line was deserving of a Best Picture win. Apocalypse Now, and even Norma Rae for that matter, had much better plot lines with amazing scenery, character development and story progression. Breaking Away was the hidden gem in this lot and All That Jazz gave me serious fever dreams.

Thanks for all the chest hair, deep V-necks and brown power suits, 1980…onto the next pull!