Party ideas for any occasion or celebration.

The 4th of July is right around the corner…which means it’s time for hotdogs, yard games, fireworks, and all the red, white, and blue attire you can handle. 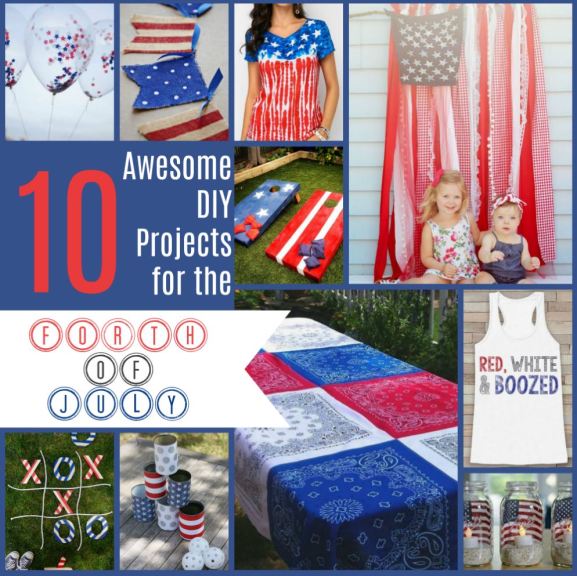 If you’re hosting a 4th of July celebration this year, there’s no need to stress about patriotic decor. with these 10 fun 4th of July ideas, you can create a patriotic play zone that is worthy of a firework celebration! 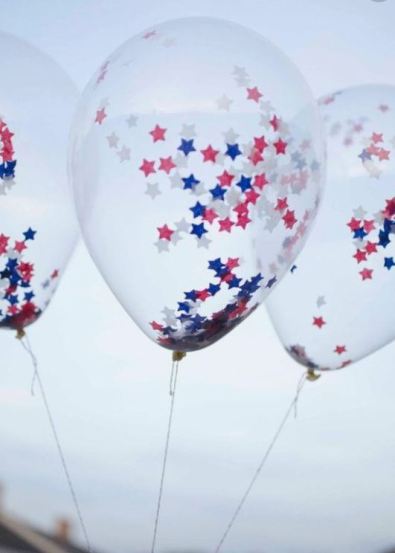 Every girl may dream of becoming a Disney princess, but not every girl can…

Not even ELSA made the final cut, you guys. The stakes are high.

Some female protagonists, even those that hold the “princess” title, may not be included in the Official Disney Princess lineup. This could be because of one of several reasons: they are not marketable, their film did poorly at the box office, they are too young, they are not human, etc. In the case of Elsa and Anna, their franchise (Frozen) was so successful on its own that Disney figured they didn’t need to be part of the lineup. Tough break, ladies. Apparently it IS lonely at the top.

Those lucky enough to make the cut were: Jasmine (Aladdin), Rapunzel (Tangled), Snow White (Snow White and the Seven Dwarfs), Mulan (Mulan), Aurora (Sleeping Beauty), Cinderella (Cinderella), Pocahontas (Pocahontas), Tiana (The Princess and the Frog), Belle (Beauty and the Beast), Arielle (The Little Mermaid) and Merida (Brave). For the rest of us poor, unfortunate souls, we can only dream of joining the official ranks! 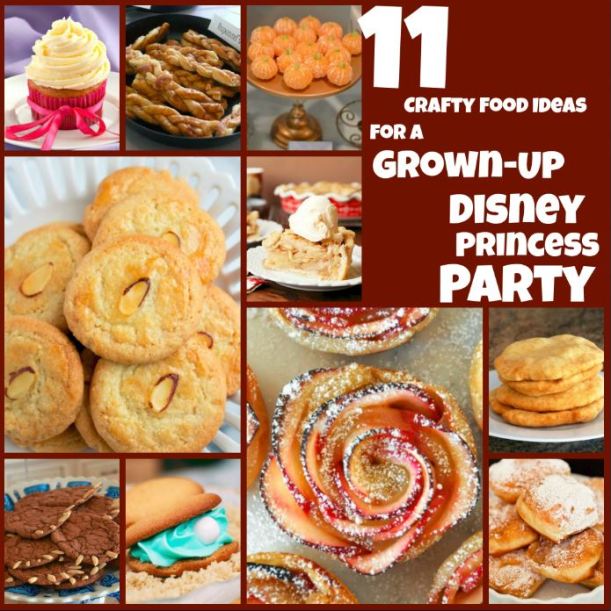 One way to pretend you’re BFF’s with Mulan and Belle is to have a grown-up Disney Princess party! With these grown-up treats, you can create a whole new world of magic and childhood giddiness! Just remember to wrap everything up by midnight…mostly because, let’s be honest, we’re all gonna be passed out anyway…

Use the flavor of Jasmine to ice these delicious Vanilla Cupcakes with Jasmine Buttercream. Hopefully everyone can try one before Abu snatches them away!

Entice guests to the west side of your kitchen with these blooming Apple Roses. A soft sprinkle of confectioners’ sugar makes these sweet flowers irresistible to curious minds.

She may have been trapped in a tower, but home girl certainly knows how to work a skillet! Serve up these tasty Rapunzel Braids in a cast iron skillet…or use the skillet to make a decadent chocolate chip cookie to enjoy with friends (or by yourself!).

Life is better under the sea…and these Oyster Pearl Cookies are a sweet bite of better living! Don’t forget to serve them with a dinglehopper! 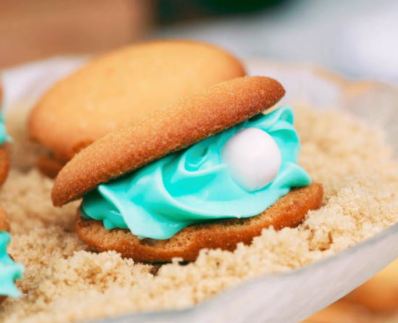 Nothing says New Orleans like beignets. Coated with sweet confectioners’ sugar and a delightful mess to eat, these southern staples will help you catch your man in no time! 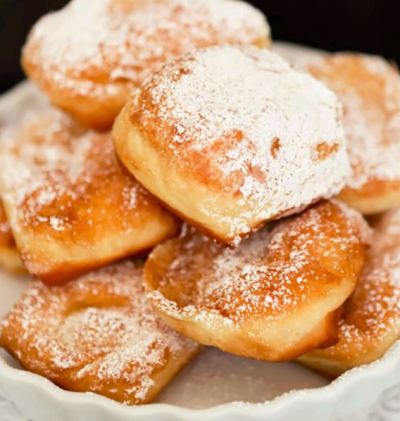 This Dutch Apple Pie certainly isn’t poisonous…though you might want to tell people it is so there’s more to eat for yourself! Topped with tasty vanilla (or cinnamon) ice cream, this pie is a must for any princess-themed party!

These little Clementine Pumpkins can be eaten before, during, and after midnight without any risk!

Here’s a fun play on Sleeping Beauty’s pink/blue dress. These Pink and Blue Macarons are so cute and colorful…and they’d be even more on point if you mix the batter colors before piping your cookies!

These Big Brown Bear Cookies are perfect for Merida fans! Use a brownie mix to make your cookies, then add nails with slivered almonds for a ferocious cookie worthy of royalty.

First of all, #hairgoals. Second, Native American Fry Bread is a great way to honor this beautiful Disney princess. A great accompaniment to stew or soup, this fry bread may not be all the colors of the wind, but it’s all the flavors of delicious.

Nothing goes better with tea than these delicious Chinese Almond Cookies. A traditional Chinese dessert, these sweet and crunchy cookies are sure to bring honor to your party!

I recently went through my craft stash and did a MASSIVE clean…I got rid of yarn I don’t use, supplies I never use, paper I’ve never used…and sitting at the bottom of one of my craft containers was a stash of scrap paper.

Saved from various paper projects, this collection of scrap paper had a whole mess of paper in it. In an effort to really make a dent in my craft stuff, I set it aside to be recycled…

But…then I got an idea!

Also in my collection of stuff to bring to work and put on the free table was a bag of small pom poms. I have no idea why I had these or where they came from, but I grabbed them and my paper stash and got to work making some little party hats.

Needless to say, this was a great way to use up my paper scraps and now I have a fun little garland to hang up during birthday celebrations!

I found a template for a mini hat at the This Heart of Mine blog (link below) that made super cute hats about 1 in. high. She also includes a pattern for human-sized hats if you want to get crafty for a party!

A fun garland to hang on the wall or use to wrap a gift, this birthday hat garland is fast, easy, and oh so adorable!

String up and enjoy!

My dad was a sucker for Valentine’s Day. He always showered my mom with cards and gifts and would get us kids little Valentine’s for our lunches.

I loved getting little Valentine’s from my dad, and with the holiday of love on the horizon, these Sweet Notebook Paper Goodie Bags make wonderful Valentine’s Day treat holders!

Great for filling with candy, cookies, or just a sweet love letter, these adorable paper bags are super easy to make and only require a handful of supplies.

One sheet of notebook paper will make two bags, so don’t be surprised if you create a whole bunch of bags in less than a few hours! 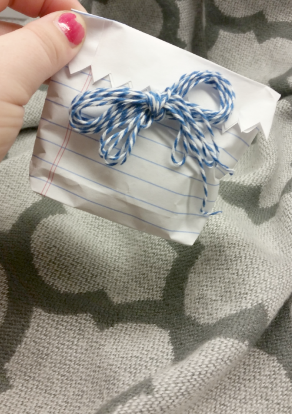 Also fun for birthday party favors or just for wrapping a simple gift for someone, these cute paper goodie bags are just as fun for kids as they are for adults!

Fill bag with whatever you’d like!  Fold to close and secure with a sticker or tape.

It was on this day in 1939 that the little town of Oconomowoc, Wisconsin changed forever. At the little Strand Theatre, a movie musical was shown on this night, starring Hollywood favorites like Ray Bolger, Jack Haley, Bert Lahr, Margaret Hamilton, and a new-comer to the Hollywood scene…a little 16 year-old girl by the name of Frances Ethel Gumm (later to be known as Judy Garland).

Three days before its huge Hollywood premiere, and 2 weeks before its national premiere), The Wizard of Oz was shown in three small test market theaters, two in Wisconsin and one in Massachusetts. During its initial run in theaters, this beloved movie musical grossed approximately $3 million (about $50 million today) in revenue.

The Wizard of Oz was nominated for several Academy Awards that year, including Best Picture and Best Visual Effects. While it lost in both of these categories, it was awarded an Oscar for Best Song (“Over the Rainbow”) and Best Original Music Score. Judy Garland even won a special Academy Juvenile Award that year, an honor she also shares with Shirley Temple, Margaret O’Brien, Hayley Mills, and Mickey Rooney. Although she was nominated for several of her other roles throughout her career, this would be the only award given to Garland from the Academy.

In celebration of the worldwide premiere of this magical movie classic, I’ve gathered up some tasty treats that are perfect for a Wizard of Oz themed party.  From Yellow Brick Road bars to an out-of-this-world Rainbow Cake, this collection of Wizard of Oz party recipes will have you doing the Jitterbug in no time! 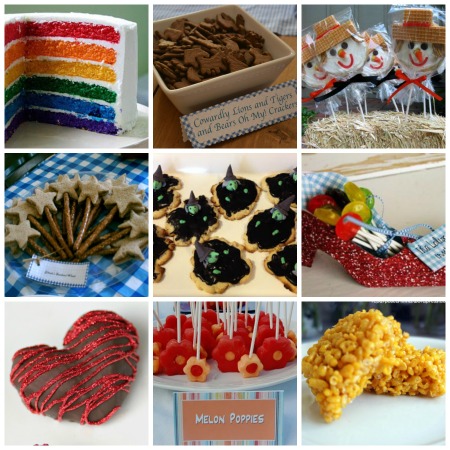 Create festive straws for your next summer gathering!  Not only do these straws make your drinks all the more beautiful, but different colored flowers help guests remember which drink is theirs.

2.  Use a small piece of double stick tape to attach the small cup to the larger one.  Thread flower over 1 straw.

3.  If desired, cut leaf shapes out of green tissue paper and secure to your straw with tape.

Wanna add some color and decoration to your end-of-the-summer outdoor BBQ?  Check out this idea:

Simply poke white lights through the bottoms of colorful cupcake wrappers for an instant chic light display.  Hang them from the roof of your gazebo, patio, or wrap them around tree trunks to instantly change the mood and look of any outdoor gathering.

Look for adorable and colorful cupcake wrappers at these Web sites:

If you’re having a dinner party, end of the summer celebratory dinner, a bridal or baby shower, or an elegant birthday party, I have just the centerpiece for you.  All you need is stemware, a flower head, and a tealight or votive candle.

The best thing about this centerpiece is that you can do whatever you’d like with it.  If you’re having a Christmas party, use little snowmen instead of flowers to make it look like snowglobes.  Fill cups with candy for a fall/Halloween party or grass and decorated eggs for a party in the spring.

If you’re looking for a neat effect, go to a thrift store and purchase different kinds of stemware…different sizes and shapes, and arrange down the center of the table.  Using all the same stemware makes for a neat look also, but mixing it up, like shown above, gives your centerpiece character and style.

**Just a little note to my daily readers–I’m heading out on a camping trip tomorrow, so I’ll miss you on Thursday and Friday…but I’ll see you all next week!