Quick and easy recipes that are meat-free.

I’m a girl with Italian in her blood.  I am from Chicago, after all.  And as any true Italian Chicago girl knows, there’s nothing better than eggplant Parmesan on a cold fall or winter day.  It’s warm and delicious in every way, but despite the fact that the main ingredient is a hard core veggie, the way eggplant parm is traditionally prepared turns this delicious dish into a heart attack on a plate.  Not to mention that it can take an entire day to make! 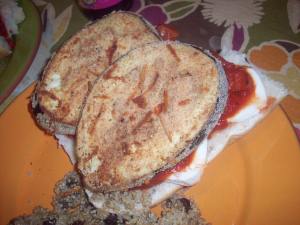 So I began thinking of other ways to enjoy eggplant Parmesan without having to work out extra hard the next day…and the day after that.  So here I give you my deconstructed eggplant parm recipe.  This eggplant is baked in the oven, rather than fried in oil…and dare I say the baked version is much better!  If you’re craving a traditional eggplant parm dish, you can also throw these bad boys onto the stove in a splash of extra virgin olive oil.  Cook them for about 5 minutes per side and you’re good to go.

I also omitted the pasta and turned this into more of an open-faced sandwich.  You can easily omit the bread, too and enjoy the baked eggplant as is.  It’s a hearty dish that takes a quarter of the cooking time of traditional eggplant Parmesan so it’s great for a weeknight meal.  We served ours with a quinoa mushroom risotto (yum!) and some delicious Three Floyd’s Broo-Doo beer!  This was a Chicago meal if there ever was one! 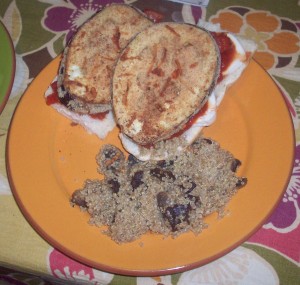 Greetings, readers!  I must apologize for taking last week off…I needed some time to settle into my new place and get my life in order.  Thankfully, I had plenty of time to do that last week and I’ll be able to post some pictures of my new place tomorrow!  It’s not totally finished, but it’s a start…

For now, I would like to share with you one of my new favorite recipes.  For New Year’s 2011, my amazing boyfriend and I stayed in, cooked dinner, and watched some bad TV…it was perfect.  I had mentioned to him a few years ago that I had never tried eggplant and I was looking for a recipe that would help me fall in love with this beautiful veggie.  Being the food aficionado that he is, he suggested we cook up some eggplant Parmesan…and it won me over in no time.  Granted it’s not the healthiest thing in the world, but once in a while it just hits the spot. 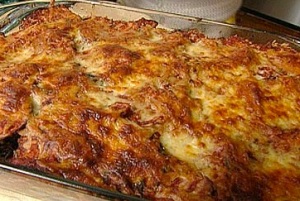 Arrange the eggplant slices on several baking sheets and sprinkle generously all over with kosher salt. Set aside to let the bitter juices weep from the eggplant, about 1 hour.

Transfer the eggplant to a colander in the sink, and rinse well under cold running water. Transfer eggplant to a work surface and blot very dry with paper towels.

In a large bowl, whisk together the 1 1/2 teaspoons salt, breadcrumbs, oregano, thyme, and season with pepper.

Place the flour in a medium lipped plate or bowl. In another medium bowl, whisk the egg and milk together. Dredge an eggplant slice in the flour, then dip it in the egg, and finally dredge it in the breadcrumb mixture. Shake off any excess breading and transfer the eggplant to a baking sheet. Repeat with the remaining eggplant.

Working in small batches, fry the eggplant slices, turning once, until golden brown, about 3 minutes per batch. Using tongs, transfer to a paper towel-lined baking sheet and season with salt to taste. Repeat with the remaining eggplant.

Preheat the oven to 400 degrees F. Lightly brush a 15 x 10- x 2-inch-baking dish with olive oil. Cover the bottom of the baking dish with 1/3 of the marinara sauce and arrange half of the eggplant over the sauce. Cover the eggplant with another 1/3 of the sauce. Scatter half of the Parmesan and half of the mozzarella over the sauced eggplant. Repeat with the remaining eggplant, sauce, Parmesan, and mozzarella. Bake until hot and just beginning to brown, about 30 minutes. Serve immediately. 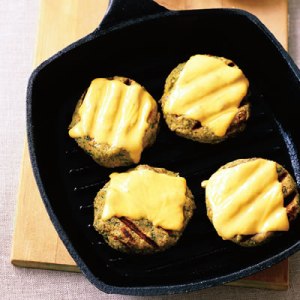 One 15-oz can chickpeas, rinsed and drained

Salt and pepper to taste

1.  In a food processor, pulse the chickpeas and parsley until finely chopped.  Transfer the mixture to a medium bowl and stir in the bread crumbs and salt and pepper to taste.  Stir in the egg and form the mixture into 4 patties, each about 2/3 inch thick.

2.  In a large skillet (or in your Forman Grill), heat the oil over medium heat.  Cook the burgers for 4 minutes, then flip and cook for three minutes more.  Top with cheese and let cook one more minute.